The stars of Australia’s film industry gathered on Sunday, October 16 to celebrate the release of Joel Edgerton’s latest flick, Warrior.

Joel Edgerton, Nash Edgerton, Ronan Keating,Emma Ralph,Barry Southgate and Damien Walshe Howling arrived looking dolled up and glam for an event that was a celebration of Edgerton’s rise in the american film industry and back home.  Also starring in The Thing (out now) Edgerton is working on a host of films, including Baz Luhrmann’s Great Gatsby. 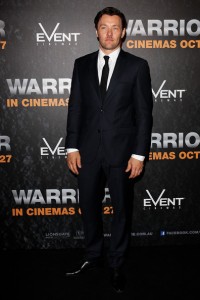 NinetoFive’s James Gorman caught up with Edgerton and fellow guest Ronan Keating on the red carpet.

The film is about two estranged brothers who are pitted against one another in a Mixed Martial Arts fighting ring.

Ex-Marine Tommy Riodan (Tom Hardy) returns to his hometown of Pittsburgh to see his father (Nick Nolte), a recovering alcoholic and former coach. Tommy enlists his father to help him train for an MMA tournament with a huge prize jackpot.

Tommy’s brother, Brendan (Joel Edgerton) a former MMA fighter is finding it impossible to make ends meet as a school teacher, so he returns to ring to help provide for his family.

Brendan’s rise as an underdog fighter sets him up to fight with Tommy. The pair finally confront the issues that tore them apart in an all out battle where the winner takes all.

So far, box office stats show the film is popular with audiences, grossing more than $5 million in its first week.

It’s a good sign for Edgerton: the better the box office, the better roles on offer.

Comments Off on “Warrior” Australian Premiere